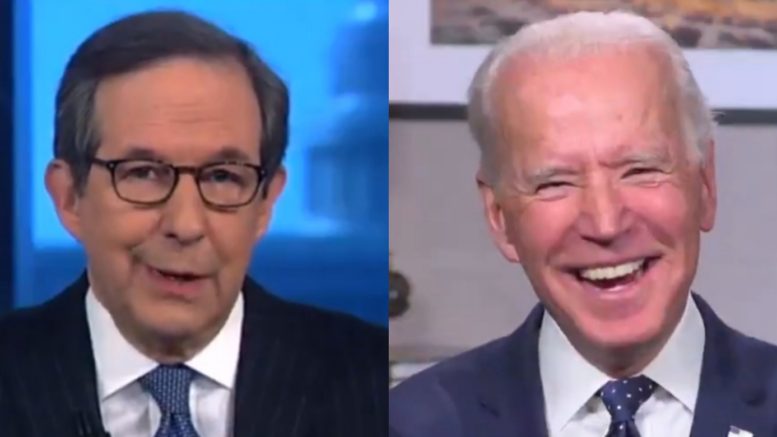 On Sunday, Fox Host Chris Wallace got corrected by Joe Biden after insinuating that the former Vice President is “moderate.”

Wallace made the suggestion while interviewing Biden over his big victory in Saturday’s South Carolina primary, where he won by nearly 30% over his Democrat contenders and gave him momentum he needed before Super Tuesday.

Related Article: Biden To Those Who Benefited From Tax Cuts: “If You Elect Me, Your Taxes Are Going To Be Raised, Not Cut”

Wallace questioned Biden on whether the “centrists” of the party should unite around one candidate after Super Tuesday to take on self-proclaimed Socialist Bernie Sanders.

“Should you get together after Super Tuesday and whoever is in the lead amongst you, whoever has the most delegates, all of the others say, ‘We’re gonna get out and we’re gonna support this moderate to go one on one against Bernie Sanders’?” Wallace asked.

Biden replied, “Well, it’s kind of interesting on your show for me to be called a moderate, Chris. I know it’s been thirteen years since I’ve been on it, but I’ve never been called a moderate on it before. And I don’t consider myself [a moderate].”

Wallace cut in and said, “A relative moderate,” which caused Biden to laugh and say, “I’m making the point that I have a very, very, very progressive record and the issue is ‘What can we get done?'”

Is it time for moderates to get behind one candidate before a clogged center-lane gives Bernie the nomination? Former VP Joe Biden reacts: "It’s not for me to tell any other candidate to get out of the race. They'll know whether or not they remain viable." #FNS pic.twitter.com/0jE7y6BFQ7

Considering Biden as a “moderate” is quite the stretch, as he has pushed for higher taxes, more restrictions on guns, and his willingness to sacrifice hundreds of thousands of blue-collar jobs for a greener economy.

Here is another part of the interview, where Biden gives his thoughts about the candidacy of Bernie Sanders and Mike Bloomberg:

On FOX News Sunday, Joe Biden reacts to his first victory in the Democratic primary. More states are at play on Super Tuesday. Joe Biden reacts to the competition and Mike Bloomberg’s big-bucks: “Money can buy a lot."…"It can’t hide your record.” #FNS #2020 #Politics pic.twitter.com/CTLgewLpgH

In ending, here is Biden reacting to President Trump’s criticism of him at CPAC:

Joe Biden addresses his gaffe-prone campaign and President Trump’s attack against him at CPAC: “I can hardly wait to debate him on stage.” “We’ll see who’s sleepy.” #FNS #FoxNews pic.twitter.com/LY8JcqQ33o