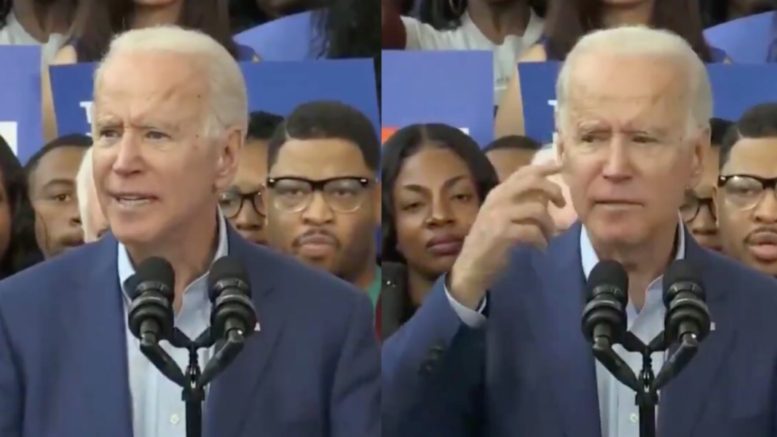 The day before Super Tuesday, former Vice President Joe Biden appeared to forget the words to the Declaration of Independence while in speaking to voters at a rally in Texas.

He also began to say “Super Thursday”, instead of “Super Tuesday”, while addressing the crowd.

“We hold these truths to be self-evident. All men and women created by– you know, you know the thing,” the Democratic candidate said referring to the Declaration of Independence.

Biden also appeared to be confused by the days of the week.

“Join us. Go to Joe Biden dot com. Sign up, volunteer. Contribute if you can,” Biden said. “But we need you very badly, every vote matters tomorrow. … Look, tomorrow is Super Thur[sday]– Tuesday. And I want to thank you all. I tell you what, I’m rushing ahead, aren’t I?”

(Related: Biden To Those Who Benefited From Tax Cuts: “If You Elect Me, Your Taxes Are Going To Be Raised, Not Cut”)

Biden is expected to get a boost on Super Tuesday after Minnesota Sen. Amy Klobuchar and former South Bend, Indiana Mayor Pete Buttigieg dropped out.

The former vice president was also mocked on social media for his latest gaffes. (Video Below)

Make it stop. It is now cruelty. pic.twitter.com/abLItTpzia

The Democrats are going to stuff Hillary Clinton in with a bogus brokered convention or they are going to attach her to this sad, broken man as VP. Either way they will steal this election for #HillaryClinton. She’s the Terminator. pic.twitter.com/abLItTpzia

If you were wondering how the Democrat primary was going, Joe Biden just botched the most popular sentence in the Declaration of Independence and told people to vote on “Super Thursday.”

Talk about a train wreck!pic.twitter.com/MiYpYSQj6b

Wouldn’t it be crazy if, after the lame Buttigieg & Klobuchar endorsements tonight, Corn Pop popped out of the audience and endorsed Biden too?

We leave you with another tweet from James Woods on Joe Biden:

This is from back when #JoeBiden was just a liar, before he was a liar with onset dementia. Regardless of his mental status, his moral status remains unchanged: he is a lying dog-faced pony soldier, corrupt to the core, a true Democrat through and through. pic.twitter.com/VRGJxSn29M