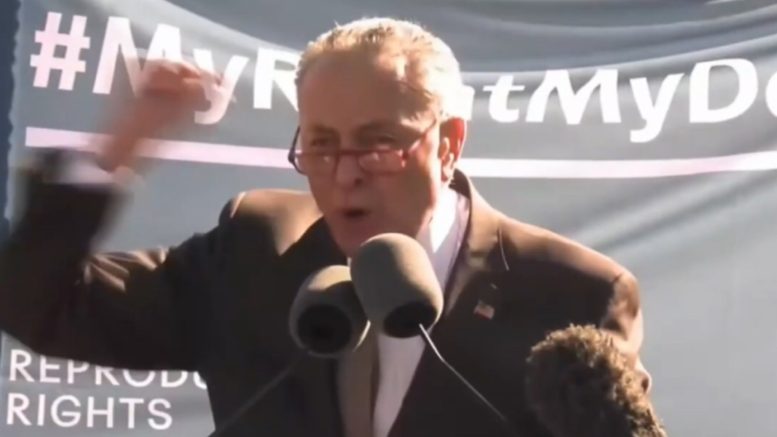 During a rally on Wednesday outside the U.S. Supreme Court, Senate minority leader Chuck Schumer (D-NY) warned Supreme Court Justices Neil Gorsuch and Brett Kavanaugh that they “will pay the price”, while he spoke to activists and rallygoers.

At the rally hosted by the Center for Reproductive Rights, Schumer noted that the case, June Medical Services LLC v. Russo, is the first “major” abortion case since President Trump’s court picks have been on the bench. The dispute, dealing with restrictions over who can perform abortions, involves a Louisiana law similar to one in Texas that the court ruled unconstitutional in 2016, before either Trump justice was on the Supreme Court and before conservatives held a 5-4 majority, as reported by Fox News.

“I want to tell you, Gorsuch. I want to tell you, Kavanaugh. You have released the whirlwind and you will pay the price!” Senator Schumer warned. “You won’t know what hit you if you go forward with these awful decisions.” The New York Democrat also said the pair “won’t know what hit you” if they side in a way that hurts abortion access in a case before the court Wednesday.[Emphasis added].

Schumer did not explain what “price” this would be as far as the justices are concerned. But reached for comment, his office said in a statement to Fox News: “It’s a reference to the political price [Republicans] will pay for putting them on the court and a warning that the justices will unleash a major grassroots movement on the issue of reproductive rights against the decision.”

Last August, a group of Democratic senators, led by Sen. Sheldon Whitehouse (D-RI), filed a brief in which they accused the court of being politicized, calling it “not well” and warning that if it does not “heal itself,” it could be “restructured.”

The case before the court is part of a larger effort by red states to pass laws regulating abortion to test how supportive the new justices will be of precedents such as Roe v. Wade and Planned Parenthood v. Casey, which formed the basis for abortion being legal, reported Fox News. (Continued Below)

The law in question requires abortion doctors in Louisiana to have admitting privileges at a nearby hospital in case a patient experiences complications during or after a procedure. Those backing the law argue that it regulates abortion providers similarly to how other medical providers are regulated by the state while also ensuring doctors are competent. Opponents say that it is targeted at abortion providers with the goal of shutting them down, citing a 2016 case out of Texas in which the Supreme Court invalidated a very similar law.

The court’s opinion in the 2016 case, Whole Women’s Health v. Hellerstedt, said the law placed an undue burden on women seeking abortions because it would significantly reduce the number of available facilities in the state. Video Below

“I want to tell you Justice Kavanaugh and Justice Gorsuch: You have unleashed a whirlwind, and you will pay the price”pic.twitter.com/MellytNNp5

Rep. Jim Jordan (R-OH) noted that in the past, Schumer threatened the intelligence community has “six ways from Sunday at getting back at you”.

First Schumer tells President-elect Trump: "You take on the intelligence community, they have six ways from Sunday at getting back at you."

Today he threatens 2 Supreme Court justices: "You will pay the price. You won't know what hit you."pic.twitter.com/jGQ8m5qcjB

(Related: Sen. Tom Cotton On Schumer’s Motives: “This Is For Chuck, About Winning Back The Senate Majority, Not About Removing Trump From The WH”)