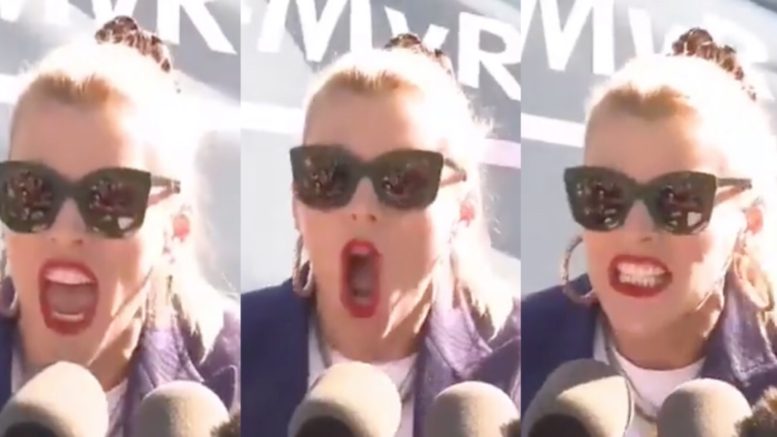 On Wednesday morning, actress Busy Philipps showed up with abortion-rights activists, including actress and Hollywood director Elizabeth Banks, who led a pro-abortion rally outside the Supreme Court.

Busy Philipps declared that she will never stop telling the world about her abortion, which she had at 15 years old, and suggested she would not be where she was at today, had she not done it.

At that same rally, Senator Chuck Schumer appeared to threaten Supreme Court Justices, Neil Gorsuch and Brett Kavanaugh, should they vote against abortion. (Continued Below)

(Related: Sen. Hawley Announces He Will File A Motion To Censure Schumer For Attempting “Intimidation Of Supreme Court”)

“I want to tell you, Gorsuch. I want to tell you, Kavanaugh. You have released the whirlwind and you will pay the price!” Senator Schumer warned. “You won’t know what hit you if you go forward with these awful decisions.” The New York Democrat also said the pair “won’t know what hit you” if they side in a way that hurts abortion access in a case before the court Wednesday.

Chief Justice John Roberts condemned Schumer’s comments, accusing him of “dangerous” rhetoric. “Justices know that criticism comes with the territory, but threatening statements of this sort from the highest levels of government are not only inappropriate, they are dangerous,” Roberts said in a statement. (Video Below)

Actress @BusyPhilipps says all of her success is due to having an abortion at 15:

"I will never stop talking about my abortion or my periods or my experiences in childbirth, my episiotomies, my yeast infections, or my ovulation that lines up w/ the moon!"pic.twitter.com/qtQI5aWSgg