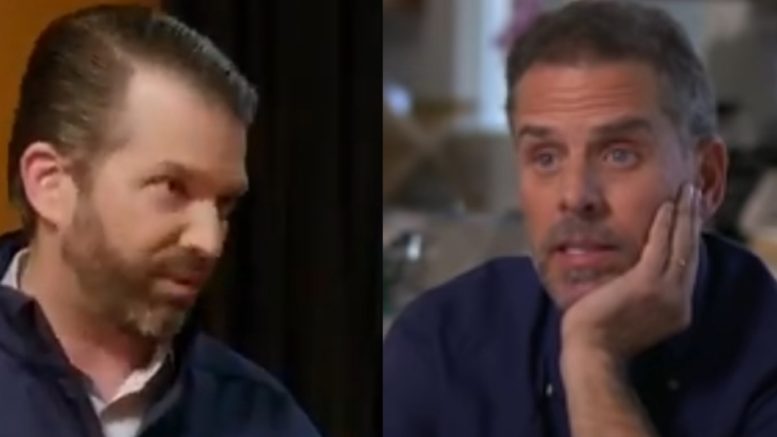 Donald Trump Jr. challenged Hunter Biden to a debate while interviewing on “Axios on HBO” with Jim VandeHei.

The challenge was brought forth when Donald Trump Jr. was discussing the hypocrisy of the media’s coverage of the Bidens versus the Trumps.

Related Article: Biden To His Missouri Supporters: “We Can Not Win This Re-election …We Can Only Re-elect Donald Trump…”

“Joe Biden doesn’t know what state he is in 50% of the time. If Donald Trump did the equivalent, you would not hear anything other than that,” Trump Jr. told VandeHei before targeting Hunter.

He continued, “Hunter Biden, his father becomes the VP, all of a sudden he goes over to the Ukraine and he’s making $83,000 a month.” Video Below

With that said, Donald Jr. said his family stopped doing international business deals when his father won the presidency.

“So, you know what would be great? I’ll let you host it” Trump Jr. said as he pointed to VandeHei. “You moderate the debate between Hunter Biden and myself…We can go full transparency…And we can talk about all of the places where I’m supposily drifting, but Hunter Biden isn’t. I would love to do it.”

“Let’s talk about who profited off of whose public service,” he concluded. “Happy to do it. Let’s make it happen.” Video Below

The MSM loves making a false equivalency between us, so lets settle it:

I challenge Hunter Biden to man up & debate me@JimVandeHei moderates. Hunter releases his tax returns & I release mine. Let's have an open convo about who really profited from their father's public office! pic.twitter.com/6N6MObhGhb