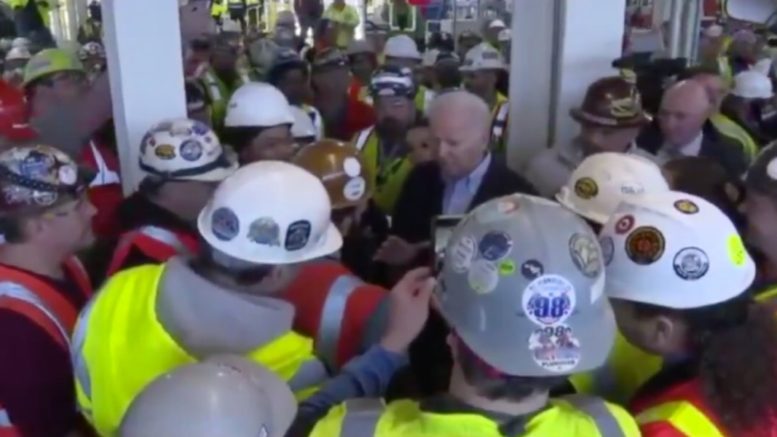 Former Vice President Joe Biden didn’t like something that an autoworker confronted him with pertaining to guns in Detroit, Michigan on Tuesday and fired back by cussing at the autoworker.

This comes after the Democratic presidential candidate accepted Robert Francis “Beto” O’Rourke’s endorsement last week in Dallas and told the former Texas congressman that he will be involved in federal gun control efforts if Biden takes office.

One of the autoworkers told Joe Biden that he is “actively trying to amend your second amendment right and take away our guns”.

“From the very beginning– I have a shotgun, I have a 20 gauge, a 12 gauge. My son’s hunt. Guess what? You’re not allowed to own any weapons. I’m not taking your gun away at all. You need a hundred rounds?” Biden asked.

The autoworker told Biden: “You were with Beto when you said you were going to take our guns away.” (Continued Below)

Biden told the autoworker that the viral video is “simply a lie”, but the man shot back and told Biden, “It’s your voice!”

“Wait! Wait! Wait! We’ll take your AR-14’s away!” Biden said, to which the autoworker told Biden “This is not okay”. (Continued Below)

Biden then told the man, “Don’t try me, pal. Do you want to go outside?”

The autoworker told Biden, “You’re working for me, man!”

“I’m not working– come here, brave man. Don’t be such a horses’ ass,” Biden declared. “Look here’s the deal: are you able to own a machine gun?”

“Machine guns are illegal,” the autoworker told Biden, to which he responded, “That’s right. So are AR-15 illegal.”

“How is that a machine gun? It’s semi-automatic,” asked the autoworker, which prompted Biden to say, “No, it’s not. Do you need a hundred rounds?” (Video Below)

“There are more deaths in America with handguns than there are with what you call “assault weapons”, the autoworker told Biden. “Why are you advocating for assault weapons when people are dying by handguns?”

I’m seeing DNC propaganda media desperately trying to spin that this was a “brave thing” for Biden to do.

Biden is a *candidate* for President.

It will haunt Joe.

🚨 HERE is the up close video Biden’s encounter with Union man in Detroit. 🤡🚬

Joe Biden says Beto "Hell Yes, We're Going to Take Your AR-15" O'Rourke will "take care of the gun problem" for him.

Don't be fooled: Joe Biden isn't any less radical than the rest of them. pic.twitter.com/tVpGCMmy9n

Biden lies to this worker, and claims that he never said he would take away guns

Last August, he said exactly that about many popular rifles

"To gun owners out there who say, well, a Biden Administration means they're going to come for my guns…"

I'd like to remind you that this isn't even the craziest thing Joe Biden has said on guns.

In an interview, he said to protect yourself, all you need to do is walk out on your balcony and shoot two shotgun blasts in the air and that you don't need an AR-15. "Buy a shotgun." pic.twitter.com/y8gQEabgsS