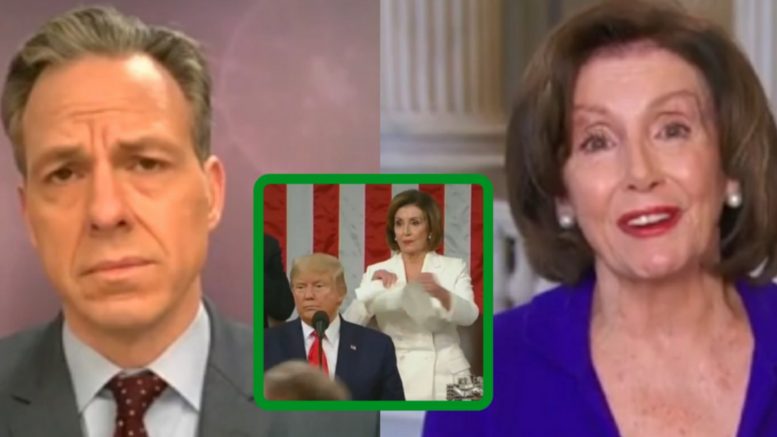 House Speaker Nancy Pelosi cited her presence at the State of the Union Address as an example for how she has communicated ‘as best as possible’ with President Trump for effective coronavirus response.

Pelosi made the reference while being interviewed by CNN’s Jake Tapper on Sunday.

Related Article: Pelosi Claims She Did “Jiu-Jitsu” To Change Coronavirus Legislation, McCarthy Levels Her: “That Is An Outright Lie”

Tapper asked, “Have you reached out to [President Trump] to try talk to him directly? Because obviously at a time like this, it’s important that all of our leaders are communicating as best as possible.”

“I’m the Speaker of the House,” Pelosi replied. “Legislation is my responsiblity — responsibility in passing policy and passing it all, but it has not required any conversations with the president on the nature of the policy or the passage of this legislation.”

“And don’t forget, I was there for the State of the Union Address and did greet the president at that time,” she added. Video Below

Nancy Pelosi bizarrely cites State of the Union, where she ripped President Trump’s speech, as an example of her bipartisanshiphttps://t.co/gCUGB1VjPC pic.twitter.com/38uvjPLbhw

Pelosi is correct that she was present at the State of the Union and did greet President Trump. However, she left out the part that she ripped up her copy of his speech transcripts at the end.

Here’s a clip of that for a refresher:

Also, during her interview with Jake Tapper, Pelosi insinuated there will be an “after-action review” of President Trump’s overall handling of the coronavirus crisis, once America sees the situation all the way through.

We leave you with that clip:

“As the President fiddles, people are dying.”@SpeakerPelosi says she wants to know what @realDonaldTrump knew about coronavirus and when he knew it, in an “after-action” investigation. pic.twitter.com/3N3G1b4XOu