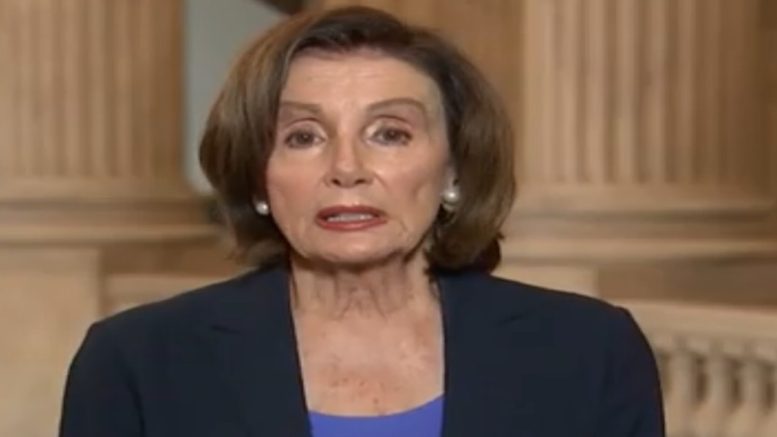 “But the good news is we live in a federal government with equal branches of government and your body has great power as well,” Geist continued. “So as you look back on the last say three months or so, do you believe that you all in Congress should have moved quicker? Do you take any responsibility for the slow response?”

Nancy Pelosi responded: “No, not at all.”

“We have, first of all, we had hope that there would be leadership from the White House because the president has to sign the bill. But we’ve had, as I say, three very strong bills that we have passed in a very positive way. Again, addressing the shortcomings that we saw. Testing, testing, testing. That was the theme of our first legislation way back when,” Pelosi said.

“I do think as we go into this fourth bill, that will be important for us, for the Republicans to recognize the challenge that is out there. Again, in these bills– when a country has a Republican President and Republican Senate, and a Democratic House, you have to make your compromises. But I feel very proud about the work that we did, the speed with which we did it, the bipartisanship that was the hallmark of it all,” she stated. Continued Below

“But, no. I think Congress has been a very positive force in this. But again, we can only go as fast as the signature. And I feel very sad that there was no recognition, no respect for science right from the start,” she said.

“But again, what I really think we have to do is go forward, after what we can have, after what we always do– after-action review about what worked and what didn’t work. But I do think, rather than spending time on the president, because he will say and do what he does, we cannot be limited by that. We must be again guided by science. … If we had had that from the start emanating from the White House … I just don’t know why the scientists did not have more sway much earlier on, in terms of the president,” Pelosi added. Video Below

Asked if she will get a coronavirus test, Pelosi said that she “kept her distance from all of the members” of Congress and claimed that her doctor does not think it’s necessary.

Nancy Pelosi says "no" regrets on the speed Congress acted after she delayed relief during the coronavirushttps://t.co/HfcQ9Jt1aD pic.twitter.com/Qa7c0O4PnR

Pelosi’s full remarks; Willie Geist and Pelosi start at the 4:43 mark in the video:

I watched a portion of low rated (very) Morning Psycho (Joe) this Morning in order to see what Nancy Pelosi had to say, & what moves she was planning to further hurt our Country. Actually, other than her usual complaining that I’m a terrible person, she wasn’t bad. Still praying!