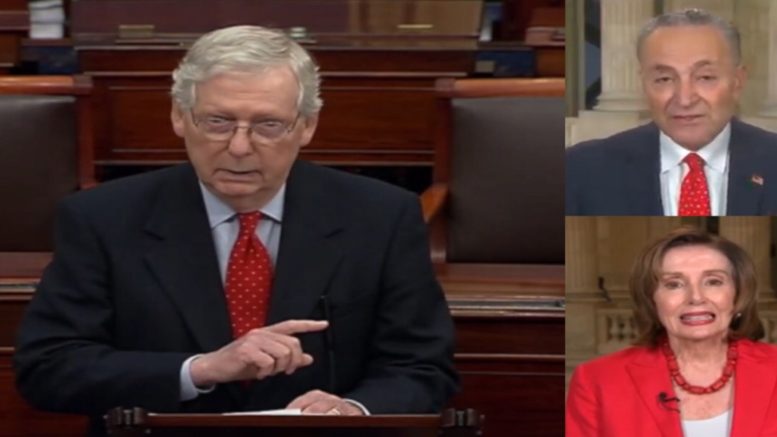 Senate Democrats on Thursday blocked Majority Leader Mitch McConnell’s (R-KY) unanimous consent to quickly approve an additional $250 billion for the Paycheck Protection Program, under which small businesses can get federally backed loans that will be forgiven if they keep workers on payroll during the coronavirus shutdown.

Monday may be the next chance to quickly approve more aid without objection, and lawmakers aren’t scheduled to return to Washington until the week of April 20, reports Bloomberg.

“The country cannot afford unnecessary wrangling. … The country needs us to be nimble,” Senator McConnell said on the Senate floor on Thursday. “My colleagues must not treat working Americans as political hostages. … We cannot play games with this crisis”

“Senate Democrats just blocked urgent money for a popular, bipartisan job-saving program which they themselves literally coauthored with us two weeks ago. I complimented both sides and asked to increase the dollar amount without changing anything else. But they blocked it,” Senator McConnell tweeted.

“We just found out that 16 million Americans have been laid off in three weeks. A staggering 10% of the labor force is now out of work. This is a crisis. No time for partisan maneuvering or politics as usual. I hope Democrats reverse course & let us increase paycheck support soon,” he expressed. Continued Below

Democrats tried to offer their own alternative to amend the GOP plan to include $100 billion for hospitals, $150 billion for state and local governments and an expansion of food assistance, in addition to the small-business funding. Republicans, similarly, rejected the Democratic measure, The Hill reported.

Steven Mnuchin told CNBC on Thursday that Trump is “willing to talk” about more money for hospitals and states in the fourth coronavirus bill. The small-business funding is viewed as an “interim” bill between the $2.2 trillion legislation and a “phase four” proposal.

House Speaker Nancy Pelosi (D-CA) said during an interview with NPR that the GOP bill could not get unanimous consent in her chamber. “The bill that they put forth doesn’t have, will not get unanimous support in the House. It just won’t,” she said. Video Below

Rep. Thomas Massie (R-Ky.) signaled that he was preparing to require a quorum, forcing a majority of the House to come back. He used a similar tactic late last month on the third coronavirus package, sparking ire from his colleagues and Trump, who referred to him as “third rate”, reported The Hill.

“Once again, they’re recommending that just let Nancy Pelosi pass it on her own, that we could all stay home. And I’m saying that’s not going to fly, doesn’t fly with the Constitution, doesn’t fly for accountability to the taxpayers,” Massie said during an interview with Neil Cavuto on Fox Business.

We just found out that 16 million Americans have been laid off in three weeks. A staggering 10% of the labor force is now out of work. This is a crisis. No time for partisan maneuvering or politics as usual. I hope Democrats reverse course & let us increase paycheck support soon.

The ink barely dry on the $2.2 trillion dollar Cares Act, money largely not yet out the door (except for PPP), and Schumer and Pelosi to seek more spending for spendings sake. We need to make sure what we have already done works as intended. Then, fill the gaps. https://t.co/rtYjcTe69v

Shameful that Senate Dems continue to play politics instead of helping the millions of small businesses hurting badly because of gov policies to #CombatCOVID19. This crisis *should not* be an excuse to advance your partisan wish list. It *should* be a reason to come together. https://t.co/0MsFmLerdj

Unfortunately Senate Democrats are about to block more money for #PPPloans

I hope they reconsider. #PPP is approving over $3 billion a hour to #SmallBusiness & will run out of funds in less than a week.

As a Main Street entrepreneur, it's sad that Senate Democrats have blocked $250 billion of additional aid for small businesses. The PPP fund will soon run out of money and more businesses will close their doors while Democrats block additional relief.https://t.co/A0R2KZFlg4

Democrats should be ashamed for putting partisan politics over Americans' livelihoods.

Nancy Pelosi and Senate Democrats are once again blocking small business relief. This is despicable. The American people are going to hold Democrats accountable for blocking money to people who are hurting https://t.co/FIctvld2ea

Senate Democrats are AGAIN blocking much-needed relief for our families and small businesses in an attempt to force more of their liberal agenda.

Americans will not forget this shameful display of partisanship during a time of crisis.