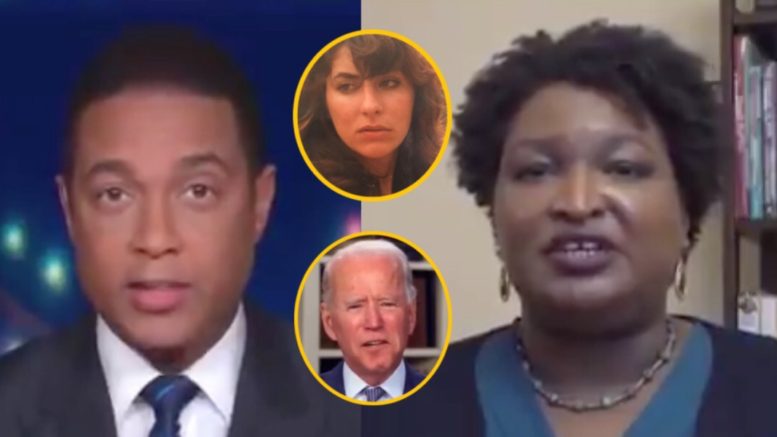 Reade was a former Biden aide who has alleged that the then-senator sexually assaulted her in 1993.

“I believe that women deserve to be heard and I believe they need to be listened to, but I also believe that those allegations have to be investigated by credible sources,” Stacey Abrams told CNN’s Don Lemon.

“The New York Times did a deep investigation and they found that the accusation was not credible. I believe Joe Biden,” she declared.

The Times, in the report that Abrams referenced, said that the newspaper found “no pattern of sexual misconduct by Mr. Biden” but didn’t come to a conclusion on the credibility of Reade’s allegations, The Hill reported.

“I believe that he is a person who’s demonstrated that his love of family, his love of our community has been made perfectly clear through his work as a congressional leader and as an American leader. I know Joe Biden and I think he is telling the truth and that this did not happen,” Abrams said. Continued Below

In 2018, Abrams tweeted: “After the courageous and compelling testimony from Dr. Christine Blasey Ford yesterday, it is shameful that Kavanaugh’s nomination is being rushed forward. I believe women, and I believe survivors of violence always deserve to be supported and to have their voices heard.”

Lemon asked Abrams if she was applying a “different standard” now, to which she replied, “Not at all. I believed then and I believe now that women deserve to be heard, because too often they are not. And Tara Reade deserved to have her story listened to and investigated.”

Abrams said there was “no investigation” for Dr. Ford, suggesting that there was a “rush to move the conversation forward so that no investigation was conducted”, but noted that she believes the New York Times reporting that supports “what the Biden campaign said”. Continued Below

“I believe the Biden I know, and I think he will make women proud. He will make America proud, Abrams added.

CNN’s Chris Cillizza noted that “Biden’s campaign is, to put it simply, twisting the report to suggest that Reade’s allegations (and the corroboration from her brother and friend) are meaningless because, well, Biden denies it and no former staffer can corroborate it. Again, not accurate.”

“As I have written before, an allegation like this in the #MeToo era can’t be pushed aside with a dismissive denial from an aide or talking points that misconstrue great reporting by the Times. The accusation merits a personal response from Biden. Still,” Cillizza added.

Last month, Tara Reade alleged that Biden had put his hands up her skirt and digitally penetrated her without consent in a Senate hallway in 1993. The Biden campaign denied the accusations. Video Below

“I believe Joe Biden… I know Joe Biden and I think that he is telling the truth, and that this did not happen.” pic.twitter.com/3tIjU6hKdh

After the courageous and compelling testimony from Dr. Christine Blasey Ford yesterday, it is shameful that Kavanaugh's nomination is being rushed forward.

I believe women, and I believe survivors of violence always deserve to be supported and to have their voices heard. https://t.co/rtT1PQr4Zq