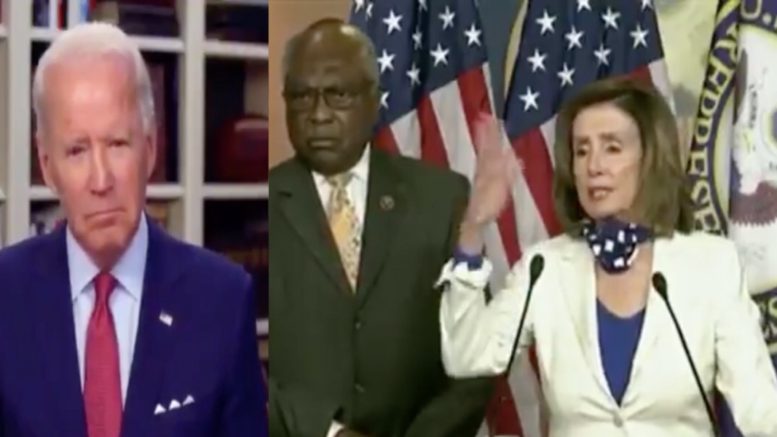 The allegations against Biden are leveled by Tara Reade, who said she was a staff assistant for Biden in 1993 when he was in the Senate.

“How do Democrats square the … they’re essentially standing by Biden, but they’re using a … different standard with Kavanaugh, when you demanded an investigation with Justice Kavanaugh– when a very similar allegation came out on him?” Washington Examiner’s Kerry Picket began to ask Nancy Pelosi.

The House Speaker interjected to inform the reporter: “Well, let me just say, I respect your question, and I don’t need a lecture or speech.”

“Here’s the thing,” she continued. “I have complete respect for the whole Me Too movement. I have four daughters and one son. And there’s a lot of excitement around the idea that woman will be heard and we will listen to.”

“There’s also due process. And the fact that Joe Biden is Joe Biden,” Pelosi said. “There’s been statements from his campaign or not his campaign, but his former employees who ran his offices and the rest– that there was never any record of this. There was never any record– and that nobody ever came forward– or that nobody ever came forward to say something about It, apart from the principle involved.” (Continued Below)

Pelosi gushed over her endorsement for Biden, expressing, “I am so proud– the happiest day for me this week was to support Joe Biden for President of the United States. He’s a person of great integrity– a great concern for American people. He authored the Violence Against Women Act when he was the chair of the Judiciary Committee in the ’90s. He has been an advocate for funding it all along since then.”

“And I believe that he will be a great president of the United States. He is the personification of hope and optimism and authenticity for our country– a person of great values,” she claimed. “So I want to remove all in anyone’s mind. I have great comfort level with the situation as I see it– with all the respect in the world for any woman who comes forward with all the highest regard with Joe Biden. And that’s what I have to say about that.”

In 2018, Pelosi appeared to believe Dr. Christine Blasey Ford’s claims against Justice Kavanaugh as she had tweeted the hashtag “#BelieveSurvivors”. Video Below

Tara Reade is calling on the University of Delaware to unseal documents it has from Joe Biden while he served as a senator, which she believes may include her formal sexual harassment complaint.

“I’m calling for the release of the documents being held by the University of Delaware that contain Biden’s staff personnel records because I believe it will have my complaint form, as well as my separation letter and other documents,” Reade told Fox News on Tuesday. “Maybe if other staffers that have tried to file complaints would come to light — why are they under seal? And why won’t they be released to the public?”

Far too few people are recognizing Dr. Ford’s sheer bravery in sharing her story today. That *must* not be overlooked. #BelieveSurvivors #KavanaughHearings https://t.co/dBGwOUmZYI