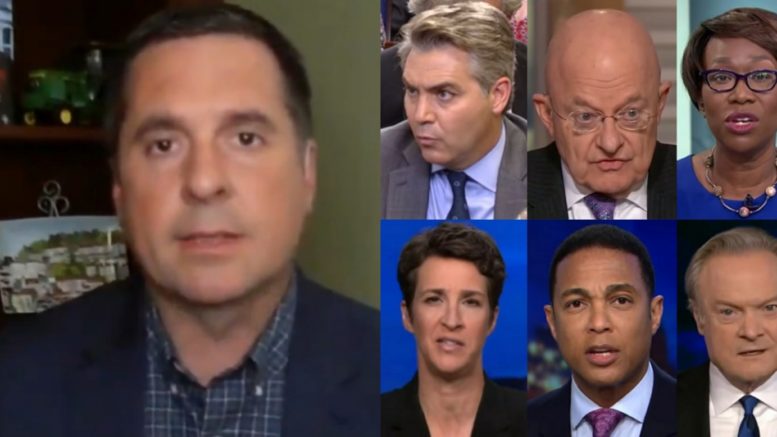 Congressman Devin Nunes slammed the mainstream media for enabling the “whole coup to be started” against President Trump, and he suggested they should be “looked at for treason.”

In response to the explosive revelations surrounding General Michael Flynn’s case, Nunes told Fox Business host Lou Dobbs that out of all the “bad actors” involved in the ‘coup’ attempt against Trump’s Administration, the ‘biggest one’ was the mainstream media, which he labled as “the enablers.”

“You might as well just move their office into the Democratic National Committee,” Nunes said in relation to the left-wing media.

“They were in on this from the start,” he added. “If you look at how they’re reacting over the last 24 hours, they’re just in denial.”

“And so the fact that you still have these lunatics out there — there’s probably a hundred of them, Lou, that were kind of the official ‘Russia hoaxers’,” he continued. “They are still out there today accusing General Flynn of being some kind of Russian agent This is the media!”

“That’s why it’s so important for the American people to understand that the media worked for the Democrats,” Nunes concluded before stressing the importance of President Trump and the Republicans not to give them the time of day, especially since “they gave the platform for the whole coup to be started.” Video Below

Bad Actors: @RepDevinNunes rails against the Left-Wing National Media for enabling the Dems’ and Deep State’s attempt to overthrow @realDonaldTrump and says they should be investigated for treason. #AmericaFirst #MAGA #Dobbs pic.twitter.com/ZqTKS6Xfxb