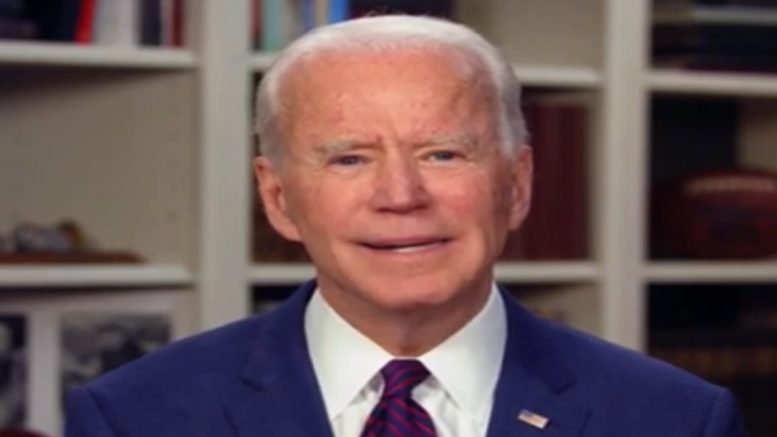 Friday during an interview on MSNBC’s “Morning Joe” and in a written statement, former Vice President Joe Biden, for the first time, issued a public denial over a sexual assault allegation leveled against him by his former Senate staffer Tara Reade.

Joe Biden was pressed during his interview on his previous comments about women coming forward with allegations of sexual harassment and assault, specifically his comments surrounding the confirmation hearing of now-Supreme Court Justice Brett Kavanaugh.

Biden said that “believing women means taking women’s claims seriously.” He added that “women have a right to be heard,” but that their claims should be investigated by the press.

“They should start off with the presumption that they’re telling the truth,” Biden said Friday. “Then you have to look at the circumstances and the facts. And the facts, in this case, do not exist. Look at the facts and I assure you it did not happen. Period.”

The former vice president also authorized a request for any relevant records in the National Archives while declining to OK a search for records at the University of Delaware, saying that those files would not pertain to personnel issues. Continued Below

Biden defended keeping the documents at the University of Delaware sealed, saying:  “Look, the fact is there’s a lot of things of speeches I’ve made, of positions I’ve taken, interviews that I did overseas with people. All of those things relating to my job. And the idea that they would all be made public and the fact while I was running for public office, they could be really taken out of context.”

He claimed the papers are “position papers” adding: “They are documents that existed– for example when I met with [Vladimir] Putin– when I met with whoever. And all of that to be fodder in a campaign at this time, I don’t know anybody who’s done anything like that. The National Archives would be the only place having to do with personnel records. There are no personal records in the Biden papers at the University”.

“I am absolutely certain”, Biden alleged of any papers that would be at the University of Delaware. Continued Below

“I mean look, who does that search?” he asked when pressed over doing a search through the files at the University of Delaware for Tara Reade’s name.

Co-host Mike Brzezinski replied, “The University of Delaware. Perhaps you set up a commission that could do it? I don’t know. Whatever is the fairest way to create the most transparency.” Video Below

Joe Biden on denying sexual assault allegations against him:

WATCH THE DENIAL: Biden on @Morning_Joe was asked about the sexual assault allegations against him. pic.twitter.com/It7DORNruK

Joe Biden says his University of Delaware documents should not be revealed because he’s “running for public office”https://t.co/AEtgu8SWLE pic.twitter.com/iiBjrNNp4T