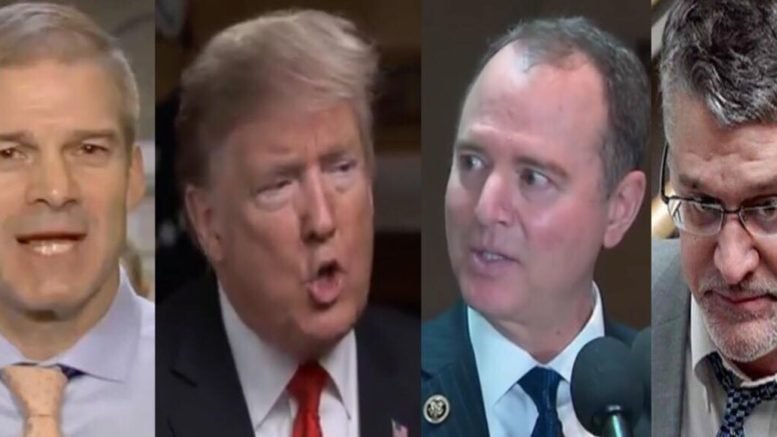 Further, Schiff has essentially become the Democrats “political opposition lead researcher” who is being used for upcoming candidates to take on President Trump in the general election.

During the State of the Union address, President Trump pointed out what he called “the politics of revenge” and “partisan investigations.”

Low and behold a day after the SOTU, Adam Schiff announced a new and wide-ranging probe into Russia election meddling and Trump’s foreign business dealings.

With Schiff being his party’s most effective villain toward President Trump and now, with the new powers of being chairman, he is drawing both new weapons and new scrutiny. However, sometimes such scrutiny inevitably turns to questions of hypocrisy. (Continued Below)

Soloman revealed that photographs taken show Schiff meeting at the event with Fusion GPS Founder Glenn Simpson, one of the key and most controversial figures in the Russia collusion scandal. Both men insisted to me through spokesmen that they met only briefly last July.

He further noted that at the time of the encounter, Simpson was an important witness in the House Intelligence Committee probe who had given sworn testimony about alleged, but still unproven, collusion between Russia and the Trump campaign. (Continued Below)

“When confronted with the Aspen conference photos of Schiff, in sport coat and open-neck dress shirt, and Simpson, wearing casual attire, representatives for both men tried to minimize their discussion, insisting nothing substantive about the Russia case was discussed.”

“In the summer of 2018, Mr. Simpson attended a media-sponsored social event where he exchanged small talk with Rep. Schiff and many other people who were in attendance,” Fusion GPS said in a statement to me. “The conversation between the two was brief and did not cover anything substantive. There has been no subsequent contact between Mr. Simpson and Rep. Schiff.”

The congressman’s response was even more vague: “The chairman did not have any pre-planned meeting with Glenn Simpson, and any conversation with him at the Aspen conference would have been brief and social in nature,” Schiff spokesman Patrick Boland said.

Translation: This was just a Forrest Gump-like moment in which the Democrats’ chief defender of the dossier and the man whose firm produced it met serendipitously.

Schiff created a far higher standard two years ago when he demanded that his Republican counterpart on the committee, then-Chairman Devin Nunes (R-Calif.), be investigated for having meetings with national security council officials at the Trump White House without telling the committee. Schiff’s attacks led Nunes to temporarily recuse himself from the Russia probe.

Schiff assailed Nunes’s contacts with a source outside the committee confines as “a dead-of-night excursion” and said it called into question the impartiality of the inquiry because the committee wasn’t informed.

“I believe the public cannot have the necessary confidence that matters involving the president’s campaign or transition team can be objectively investigated or overseen by the chairman,” Schiff said at the time.

President Trump took note of the shocking revelations that surfaced about Adam Schiff and wrote on Twitter Friday, “Now we find out that Adam Schiff was spending time together in Aspen with Glenn Simpson of GPS Fusion, who wrote the fake and discredited Dossier, even though Simpson was testifying before Schiff. John Solomon of @thehill”

Then, the President tweeted a post from Rep. Jim Jordan (R-OH) who wonders if there is a double standard going on.

Now we find out that Adam Schiff was spending time together in Aspen with Glenn Simpson of GPS Fusion, who wrote the fake and discredited Dossier, even though Simpson was testifying before Schiff. John Solomon of @thehill

-Meets with Glenn Simpson, who hired Nellie Ohr and Chris Steele and paid for the Dossier
-Doesn’t disclose the meeting
-Says there’s nothing wrong

REMEMBER: Schiff demanded that Nunes be investigated for meeting with administration officials.

Should Adam Schiff recuse himself from the Russia probe now that he’s been caught secretly meeting with Fusion GPS?