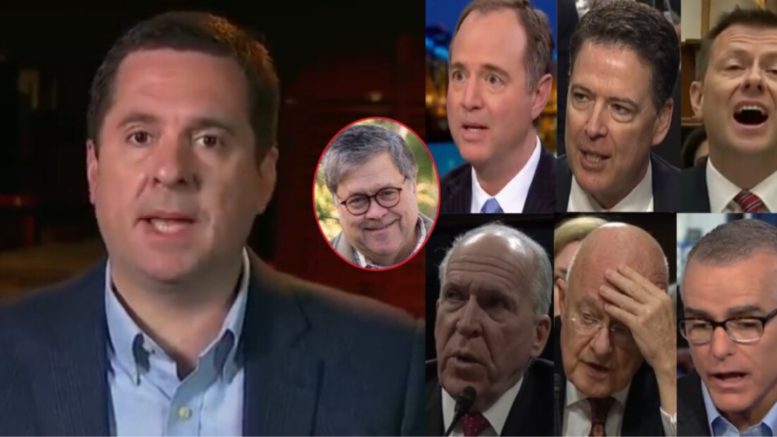 Nunes is an American hero fighting and uncovering the truth that lies deep within the swamp.

The referrals Devin Nunes discussed on Sunday, are related to the Obama administration’s handling of the Trump-Russia investigation. He noted that he couldn’t send the referrals over without an Attorney General in place. “We are prepared to send those referrals over and brief him, if he wishes to be briefed.”

He explained that the referrals will be made for alleged leaks of classified information to the media, for manipulating intelligence and for misleading foreign intelligence surveillance court judges regarding the Steele dossier. “All of these are classified or sensitive.” He said.

Nunes didn’t reveal the specific Obama officials, but did say if you’ve been following the story, you have might have an idea. He did however say that five of the officials he is referring lied to Congress, misled Congress, or leaked classified information.

“We believe there is a conspiracy to lie to the FISA court, mislead the FISA court, by numerous individuals that all need to be investigated and looked at.” He said. (Continued Below)

Nunes named another referral as the “conspiracy statute.” He explained, “The second one is involving manipulation of of intelligence.”

The California Congressman also named a third referral in which he named it a “global leak referral.” Nunes said, “There are about a dozen highly sensitive, classified information leaks that were given to only a few reporters over the last two and half plus years.”

“We do believe that we’ve got pretty good information and a pretty good idea of who could be behind these leaks.” Nunes added. (Video Below)

He named off specific leaks that involved the President and the prime minister of Australia, along with President Trump talking with the Mexican President. Nunes also pointed out leaked transcripts from General Michael Flynn. “Those are just three examples that are absolutely horrific, but there’s things that are even worse that were leaked.”

(Related: Nunes Discusses Up To Two Dozen Criminal Referrals & Why They Must ‘Go To Prison’)

Additionally, Nunes explained what criminal referral means and said, “People have to understand, there are three branches of government. We are legislative branch. We don’t strap on guns and bring handcuffs to the crime scene. All we can do is investigate. We can take information from folks, we can interview people. But we don’t have the power to arrest or convict. So we have to take these criminal referrals to the Department of Justice, [and] ask the Department of Justice to take these up.”

He pointed out that it gets complicated because the top officials in the DOJ and FBI are likely involved in the referrals. “This is why it’s so sensitive, and we want to give the referrals directly to the Attorney General and let him decide.”

Nunes also wrote an Op-Ed in the Washington Examiner entitled “The Russian Collusion Hoax Meets An Unbelievable End.” (Video Below)

(Related: Nunes Discloses The Main Reason Why Dems Want Classified Mueller Probe Info So Bad: ‘They Can Leak It To Their Buddies In The Media’)