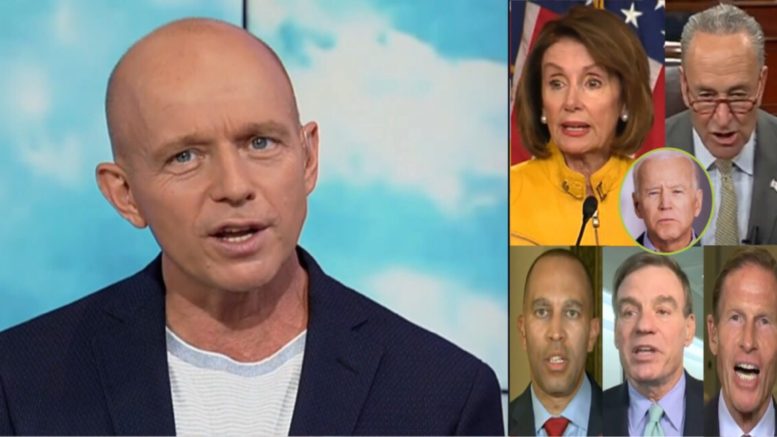 Last week during an interview with ABC’s George Stephanopoulos, President Trump was asked a setup question about whether he would accept damaging information against his 2020 rivals during the upcoming presidential race from foreigners.

However, Democrats consumed in pearl-clutching outrage after President Trump suggested, “I think maybe you do both,” referring to hearing the information, then handing it over the FBI.

On Friday, the President clarified during an interview with “Fox and Friends” when he said, “If you don’t hear what it is, you’re not going to know what it is. If I don’t listen, you’re not going to know. If I thought anything was incorrect or badly stated, I’d report it to the Attorney General, the FBI– I’d report it to law enforcement, absolutely.”

(Related: Trump Clarifies His ‘Foreign Oppo’ Remarks, SLAMS Dems Reaction To It: ‘How Can You Report Something That You Don’t Know?’)

These four sanctimonious Democrats, namely, slammed the President for suggesting he would listen to “dirt” from foreign countries, but they themselves are actually involved in corruption far worse than Trump has even been accused of doing. “The real scandal is foreign governments affecting our actual laws through foreign government lobbying,” Hilton announced. (Continued Below)

“We called all four of these Democrat hypocrites to ask if, ‘in addition to taking money, they owe their staff for taking any meetings with foreign government lobbyists.’ None of them would say, ‘Of course not,’ because we could be sure they did. That’s how the swamp works. You pay the money, you get the meeting,” Hilton said.

Then, he exposed the “ultimate Democrat hypocrisy.” After all the years of “Russia hysteria” and self-righteous shrieking about “Russia”, Hilton wondered if a Democrat would “take money from Russia”. (Continued Below)

“There is only one worse example of Democrat hypocrisy: someone who is running around accusing President Trump of being captured by a foreign power, but who himself is compromised, not just by any foreign power, but by the biggest and most hostile, America’s number one enemy: China,” he continued.

Joe Biden took billions of dollars in bribes from the Chinese government in the form of payments to the Biden family businesses and in exchange, he was soft on China while he was Vice President.

“We’ll take them seriously when they put forward a Bill to publish the details of all the lobbyists they meet with– when they put a forward a Bill to ban lobbying by hostile foreign governments. Don’t hold your breath. These Democrat hypocrites, just like the rest of Washington D.C., are totally corrupted by foreign government lobbying and cash. The outrage over election meddling is their attempt to distract from the real foreign interference in our democracy– the institutionalized and anti-American corruption of foreign government lobbying,” Hilton concluded.