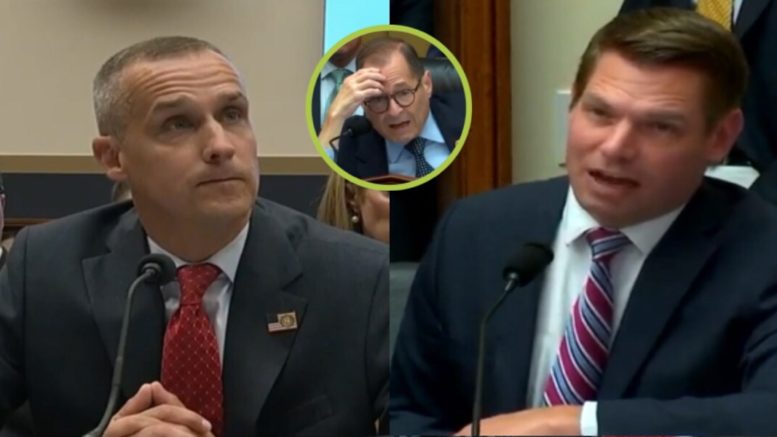 The White House, however, ordered Lewandowski not to speak about any conversation with the President or senior presidential advisers that were not mentioned in former special counsel Robert Mueller’s report, according to White House counsel Pat Cipollone.

While being questioned, Rep. Eric Swalwell (D-CA) tried to make Corey Lewandowski read his own notes he submitted to special counsel Robert Mueller regarding a meeting with President Donald Trump on July 19, 2017.

Lewandowski, however, refused to read the notes out loud and told Swalwell respectfully that the Congressman could read it. “I’m happy to have you read it, Congressman,” Lewandowski replied.

When asked by Swalwell why he didn’t want to read it, Lewandowski shot back, “I think you should afford me the same privilege you afforded Director Mueller.”

“Are you ashamed to read it out loud?” Swalwell pressed. (Continued Below)

“President Swalwell, I’m very happy with what I’ve written but you’re welcome to read it if you like,” Lewandowski responded. I’m not ashamed of anything in my life, congressman, are you?” Lewandowski replied.

The back and forth went on as Swalwell taunted Lewandowski, but the former Trump campaign manager didn’t play into the former 0% democratic presidential candidate.

“Congressman, tell me why you hold me to a different standard than the previous witnesses who sat here?” Lewandowski asked of Swalwell after he kept pressing. (Continued Below)

The former Trump campaign manager was asked by Swalwell if he placed notes in question in a safe, if it was the first time that he did that, if every note he took of the President he put in the safe, and how big the safe was, Lewandowski responded, “It’s a big safe Congressman, there’s a lot of guns in there.”

Swalwell moved on to ask Lewandowski about a meeting between him and President Trump, however, Corey said, “The White has directed me not to disclose the substance of any discussion with the President or his advisors to protect executive branch confidentially.”

Swalwell tried to request a ruling after Lewandowski refused to answer his question and Chairman Nadler told the former campaign manager that he was aiding in obstructing their investigation and that he was “instructed to answer the question.”

The California Congressman tried again but Lewandowski read off the letter from the White House that ordered him not to speak about any conversation with the President.

Rep. David Cicilline (D-RI)  became angry and called for Lewandowski to be held in contempt for not answering. (Video Below)

Swalwell insisted, “That’s not an answer!”

(Related: While Grilling Lewandowski, Nadler Puts His Irritation On Full Display: ‘I Will Enforce The Limit’)