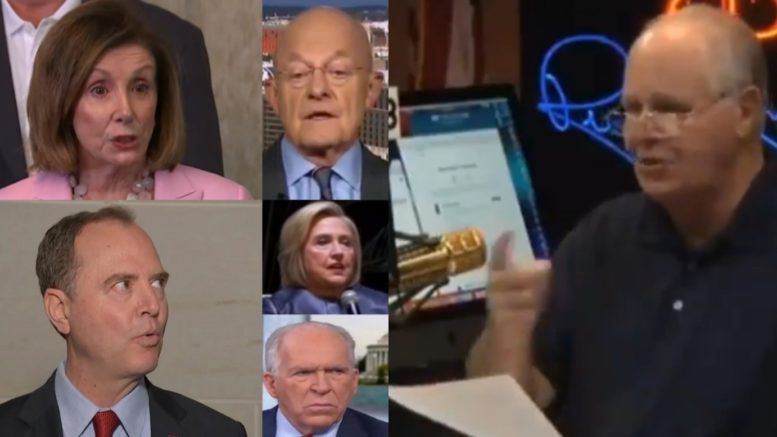 Rush Limbaugh took a moment to address John Durham’s pending investigation into Russia probe origins and why he is convinced that Democrats are “scared to death” of his findings that are set to “collide” with their impeachment efforts.

From what he understands, Rush said Durham will release information from his report “as it’s written.”

“Because, folks, they know they did it,” Rush continued. “They know they manufactured all of this. They know this investigation is fraudulent from the first that Obama convened it with Hillary’s participation and John Brennan.”

“One of the reasons they were so hellbent on Hillary winning was that no one would find out what they did!” he added.

Rush went on to say that everybody involved — Comey, Brennan and Clapper — would’ve been “promoted” and “thanked for a job well done” if Hillary won. “But Trump won. Now all of this is at risk of being exposed. And they are — they are scurrying,” he concluded. Video Below

Rush Limbaugh – Durham Report Collision Incoming
"That is what Pelosi Schiff, and everybody on that side {media] is scared to death of this [Durham Report]. Because they know they did it…They know they manufactured all of this…They are scurrying." #DurhamReport pic.twitter.com/RS0hcHqfVr

In ending, here are a pair of some of President Trump’s latest tweets in regards to Democrats impeachment efforts at the lead of Pelosi and Schiff:

Impeached for what, having created the greatest Economy in the history of our Country, building our strongest ever Military, Cutting Taxes too much? https://t.co/LWxfEcRmj4