House Democrats on Tuesday, released the text of their impeachment resolution, ahead of Thursday’s House vote, in their continued effort to impeach President Donald J. Trump.

Committees tasked to continue investigating for impeachment purposes include the Intelligence, Financial Services, Foreign Affairs, Judiciary, Oversight and Reform, and Ways and Means committees, as reported by Daily Caller.

“We are taking this step to eliminate any doubt as to whether the Trump Administration may withhold documents, prevent witness testimony, disregard duly authorized subpoenas, or continue obstructing the House of Representatives,” Pelosi said in a letter Monday.

However, when asked about the resolution on Monday evening by an NBC News reporter, Pelosi responded by saying, “It’s not an impeachment resolution.”

[The resolution] specifies that ranking Republicans in the minority on the Judiciary and Intelligence Committees (Reps. Doug Collins and Devin Nunes, respectively) will have the authority, with the concurrence of committee chairmen in the majority, to subpoena witnesses and compel their testimony — a major demand that the White House and top Republicans had made in recent weeks. If the chairman does not consent, the minority can appeal to the full committee, reported Fox News.

The resolution also authorizes the Intelligence Committee to conduct an “open hearing or hearings” in which minority Republicans have equal time to question witnesses. And, after that hearing is concluded, “to allow for full evaluation of minority witness requests, the ranking minority member may submit to the chair, in writing, any requests for witness testimony relevant to the investigation described in the first section of this resolution within 72 hours after notice is given,” per Fox News. (Continued Below)

The resolution also directs the Intelligence Committee, in discussion with the other committees, to prepare a report on its findings to the Judiciary Committee, which would write any articles of impeachment. In response to GOP complaints about Democrats’ selective leaks of opening statements and depositions, the document also authorizes the public release of testimony transcripts, with only sensitive or classified information being redacted.

Nunes, Jordan, and McCaul accused McGovern of not giving enough time for Republican members to review the resolution ahead of the vote, and blasted the inquiry as a whole. (Continued Below)

“Under House rules, you championed at the beginning of this Congress, major legislation is required to be posted 72 hours in advance of a vote,” the Congressmen wrote. “Yet, here, on the gravest and most solemn work the House can do, you are forcing the House to consider a resolution with text that is still not available two days before the vote.”

“Without text, we know nothing about the Democrats’ intended impeachment process. Your website describes the resolution as ‘directing certain committees to continue their ongoing investigation,’” they continued. “Chairman Schiff does not need a resolution to continue leaking selective facts from his basement bunker. … We can only assume, therefore, that this resolution is necessary to allow Democrats to subvert the ordinary legislative process,” they added.

The letter was tweeted right after Dems released their resolution: 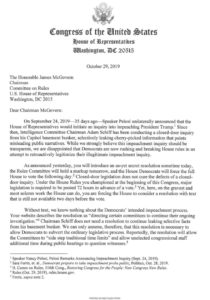 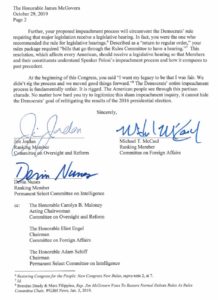 Rep. Jordan also noted, however, “Dems’ impeachment resolution: -Cuts Oversight and Foreign Affairs out of public hearings -Pretends to give Devin Nunes subpoena authority, subject to Schiff’s approval -No Due Process for the WH -Doesn’t undo the damage of Schiff’s biased and unfair sham”.

-Cuts Oversight and Foreign Affairs out of public hearings
-Pretends to give @DevinNunes subpoena authority, subject to Schiff’s approval
-No Due Process for the WH
-Doesn’t undo the damage of Schiff’s biased and unfair sham

(See Resolution and Video Below)

(Related: Jordan On The Impeachment Inquiry Vote: ”It’s A Continuation Of The Sham, They’re Gonna Try to Dress it Up A Little Bit”