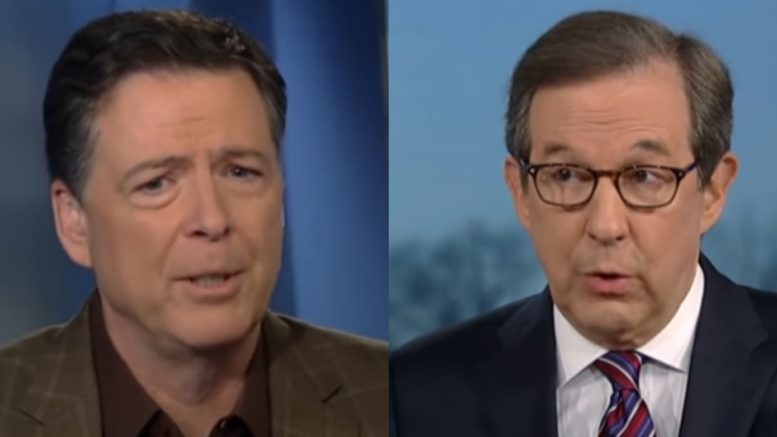 While facing off with Chris Wallace on Fox News Sunday, former FBI Director James Comey tried to clear up what he meant when he declared that he was vindicated after Inspector General Michael Horowitz publicly released his report regarding the FISA process.

Comey suggested to CNN’s Anderson Cooper that the IG’s report is “vindication” because “the FBI has had to wait two years, while the President and his followers lied about the institution. Finally, the truth gets told.”

IG Horowitz, on the other hand, had the exact opposite to say when testifying to Senator Lindsey Graham (R-SC) in Wednesday’s hearing when he stated: “I think the activities we found here don’t vindicate anybody who touched this, including the leadership.”

When pressed by Chris Wallace on Horowitz’s statement, Comey again said that Horowitz didn’t find that the FBI committed treason through “illegal spying, tapping Mr. Trump’s wires illegally, or opening an investigation without justification, of being a criminal conspiracy…to defeat and unseat a sitting President — All of that was nonsense.”

Comey did, however, admit that Horowitz found that the FBI was involved in “real sloppiness” to which Wallace replied, “Well, sloppiness may be a euphemism for what it is he found.”

Wallace played a clip from months ago that showed Comey saying that the FISA process was followed in a “thoughtful, responsible way.” This also is completely opposite from what IG Horowitz concluded from his findings. Video Below

“We identified significant inaccuracies and ommissions in each of the four (FISA) applications — seven in the first application and a total of seventeen by the final renewal application,” Horowitz is heard saying in a clip played by Wallace.

After watching the pair of clips, Comey admitted to Wallace, “He’s right. I was wrong. I was overconfident in the procedures that the FBI and Justice [Department] had built over twenty years. I thought they were robust enough.”

“It’s incredibly hard to get a FISA. I was overconfident in those. Cause he’s right, there was real sloppiness — seventeen things that either should’ve been in the applications or least should’ve been discussed and characterized differently. It was not acceptable,” Comey confessed. Video Below

Exclusively on FOX News Sunday: Chris Wallace asks Former FBI Director James Comey if the IG Report vindicates him. Director Comey responds to previous statements he made in 2018 about the Carter Page FISA warrant being handled appropriately: "There was real sloppiness." pic.twitter.com/vPmCV11hRe

Here is the full video of Chris Wallace’s interview of James Comey: