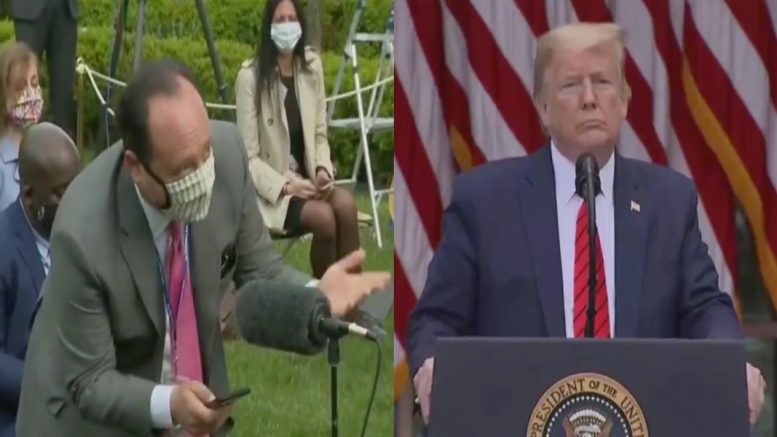 Monday during a press briefing at the White House Rose Garden, a reporter asked the Commander in Chief about a tweet regarding “#ObamaGate”, that the president wrote on Sunday.

“He got caught, OBAMAGATE!”, President Trump tweeted after the Department of Justice dropped charges against General Michael Flynn last week.

“In one of your Mother’s Day tweets, you appear to accuse [former] President Obama of the biggest political crime in American history by far. What crime exactly are you accusing President Obama of committing and do you believe the Justice Department should prosecute him?” a reporter asked President Trump.

“If you look at what’s gone on and you look now at all this information that’s being released and from what I understand, that’s only the beginning,” he said. “Some terrible things happened, and it should never be allowed to happen in our country again. And you’ll be seeing what’s going on over the coming weeks. And I wish you’d write honestly about it, but unfortunately, you choose not to do so.”

Asked by the reporter “What is the crime exactly that you’re accusing him of?” President Trump fired back: “You know what the crime is. The crime is very obvious to everybody. All you have to do is read the newspapers, except yours.” Video Below

He got caught, OBAMAGATE! https://t.co/oV6fum0zIS

Because it was OBAMAGATE, and he and Sleepy Joe led the charge. The most corrupt administration in U.S. history! https://t.co/PTzFvvITh3

On Thursday, the top prosecutor on the case, Brandon Van Grack, abruptly withdrew from the case, without explanation, in a brief filing with the court.

In addition, Schiff released Thursday, the long-delayed declassified 57 transcript interviews from 2017-2018 that reveal what was said behind closed doors when lawmakers sought to determine whether members of the Trump campaign and Russia colluded. The transcripts reveal that more than a year into the probe, senior FBI and intelligence officials could offer no specific proof of collusion between Donald Trump’s campaign and Russia.