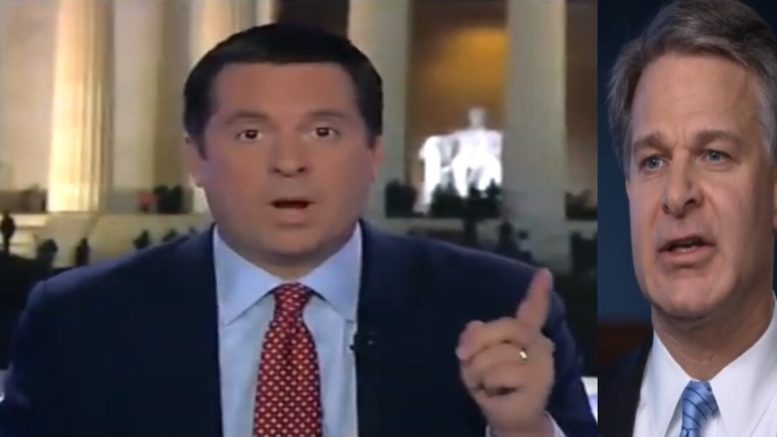 Congressman Devin Nunes (R-CA) spoke with host Tucker Carlson on Fox News Monday where he doubled down on his warning to send a criminal referral to the Department of Justice and U.S. Attorney John Durham.

This comes as Nunes is seeking answers from FBI Director Christopher Wray about the origins into the Russia investigation. Nunes wants an answer by Friday.

Sunday, during an interview with host Maria Bartiromo, Rep. Nunes disclosed that he has learned in the last month there was key information in the #2 European Affairs Department of the State Department that the FBI withheld from Congress and the FISA court.

Nunes told Bartiromo, “Because this is clearly obstructing a congressional investigation… someone at the FBI [is] determined to hide this information, not provide it to the court, and what I’m concerned about is not provid[ing] to the U.S. Congress. So, they have till Friday to get it to us, and if they don’t, we will make our 9th criminal referral.”

Asked by Tucker if he has heard back from the FBI, Rep. Nunes said, “No, not yet, but we gave them until Friday and if they don’t give us the information on Friday, I’m just gonna refer a criminal referral over to the Department of Justice to the U.S. Attorney in Connecticut. Because this is clearly obstructing our investigation.”

“We were looking at the State Department for this entire investigation, they all knew that we needed everything and anything to do with Christopher Steele. This is clearly in that lane, without a doubt,” he added. (Continued Below)

Nunes said there’s no legitimate reason that they kept the information from him for his investigation. “This is in October 2016, right before they get the FISA warrant on Carter Page.”

“This is just more evidence that shows they knew before they went to the FISA court that Christopher Steele was a big problem,” Nunes explained.

Kathleen Kavalec warned the FBI before the FISA warrant application about the anti-Trump dossier’s author, former British spy Christopher Steele and his apparent political motivations. Kavalec knew the information that Steele was providing to her was “false on its face” during an interview, and she knew that Steele was trying to leak the information to media sources. (Continued Below)

Christopher Steele and possibly others were keen to see this information come to light before the election. On October 13, 2016, just 3 weeks before the election, Kavalec sent [an] email, that has now been publicly released but redacted.

“We can’t forget that the Clinton campaign and the Democrats were paying Christopher Steele to do this. We were never able to interview Christopher Steele, I think he needs to be interviewed by the Department of Justice and the U.S. Attorney in Connecticut. I think the Brits have a lot of answers they need to give to the United States, but the bottom line is: the guy was being paid by the Democrats,” Nunes said.

“That was to dirty up Donald Trump and make it look like he has ties to Russians. And the truth is, the only one that may have had ties to Russians would be the Democrats themselves because Christopher Steele was supposedly talking to Russians,” he added.

(Related: Schiff Presents Legislation To Make It Illegal To Accept ‘Dirt’ From A Foreign Agent)

Tucker pointed out, “They always accuse you of what they themselves are doing. That’s always the key.” (Video Below)

Rep. Nunes explains his request that the FBI disclose all information regarding Kathleen Kavalec’s relationship with Christopher Steel:

Related: Tom Fitton: ‘We Need To Be Investigating Congress About Its Role In The Anti-Trump Coup’